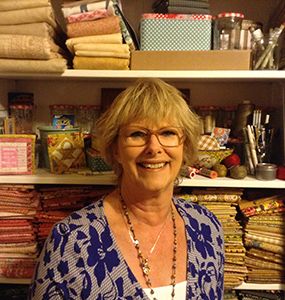 Di Ford-Hall’s quilting career began in 1980 with her first patchwork class. In early 1982 she began working at “Primarily Patchwork” in Canterbury, Melbourne, one of the two quilt shops in Melbourne at that time. In a few months she was managing the shop, and, in August 1982 she purchased the business. For the next 24 years she was the owner/manager, teacher and designer of antique and classic quilts. She loved every aspect of the business particularly the teaching and personal contact with her customers.

In those 24 years she taught approx 2000 students all the techniques required to make their own Classic American and English Style Quilts, which the shop specialized in. Many of her students went on to win prizes around the world for their quilts.

Since closing the shop in 2006 and semi-retiring, she has continued her passion for teaching and still designs her own patterns, which are sold in Australia, Europe, the US, and online.

In 2010 she was invited to exhibit her quilts in Beijing. It was the first exhibit in Beijing of Western quilts. In 2013 her first book “Primarily Quilts, 19th Century Inspirations” was released in Nantes France by French Publishers Quiltmania. As well as teaching in Australia, she has also taught in France, Holland and the UK. She am currently working on her second book due to be released in France at “Pour l’Amour du Fil” in Nantes France in 2017.

In 2014 her quilts were displayed in a special Australian exhibit at the Houston Quilt Festival. It was at this time she met with Kathy Hall from Andover Fabrics which started the discussions about her first fabric range.

Her other interests are gardening, cooking and retail therapy of the fabric kind. Also precious to her are 4 gorgeous grandchildren along with 2 English Springer Spaniels and 3 majestic horses.

Receive news and updates from us. Enter your email address below and we'll put you on our list.